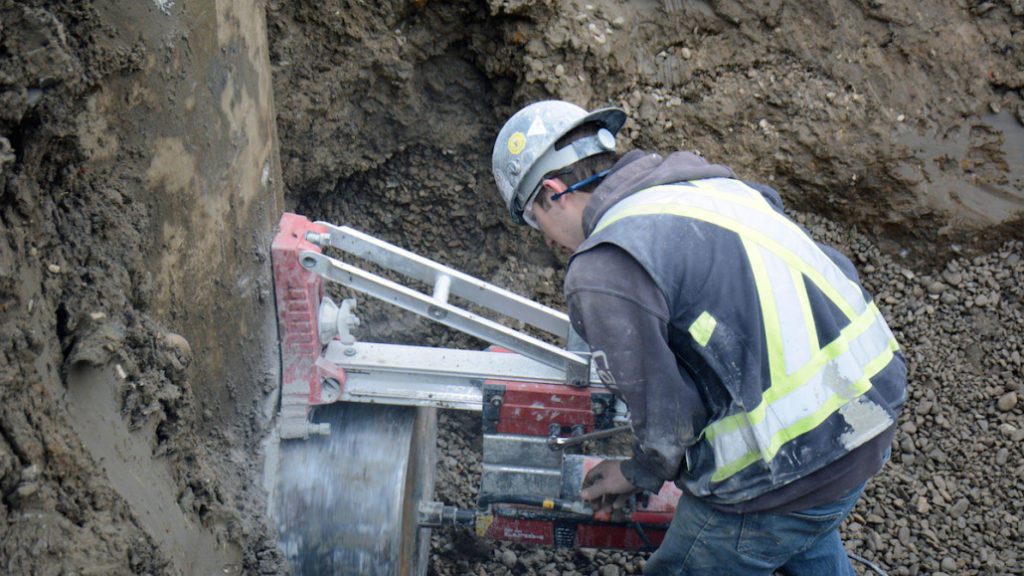 Core drilling involves the use of a hydraulic or electric (hi-cycle, or regular voltage) motor either mounted or handheld. Handheld core drilling can be useful for smaller holes, and it has certain advantages like being fast and easy to manipulate. It also requires no mounting which reduces cosmetic damage to structures. Mounted core drilling involves mounting the drill motor to a stand with a rail system that allows the drill to be moved along the rail pressing it into or pulling it out of a drilling surface. This stand is then mounted into the surface by the use of inserts (essentially expanding threaded slugs) that allow the drill stand to be bolted down. Typically this work is done in concrete, but we can also mount and drill in asphalt. Finally, attached to the motor is a drill bit. The drill bit is a hollow cylinder of metal with diamond segments welded to it. Unlike much smaller drilling (like the kind you would expect in wood) a core drill bit does not remove material from the center of the bit, but only from the circumference of the diamond segment path. This leaves behind a solid core of material which is why it’s called “core” drilling. The entire process is lubricated using water that travels through the motor and into the bit. This leaves behind slurry as the waste material from the drilling process.

That’s it for a start. Hopefully, in the near future, we’ll have some articles about other forms of concrete cutting and even what to expect when a particular piece of equipment is coming to be used on your project.